A coalition of environment groups has urged the federal government to tear up its “failed” forestry deal with states, which they blame for unsustainable logging and pushing species such as the Leadbeater’s possum and numbat to the brink of extinction.

The groups, including Victorian-based MyEnvironment and the Environment Defenders Office legal network, said they were looking at legal options to challenge the government if the Regional Forest Agreements (RFAs) are not scrapped.

The RFAs were established in 1992 in a deal between the federal government and four states: Victoria, New South Wales, Western Australia and Tasmania. The agreements gave the states, and their logging agencies, broad control over forest management.

However, the environmental groups said their legal review of the RFAs showed that they have resulted in worse standards compared to when forests were under federal control. The RFAs are exempt from the Environment Protection and Biodiversity Conservation Act, the key commonwealth tool for intervening in projects based on their impacts upon endangered species.

The report stated that state protections for threatened species were “grossly inadequate”, obligatory reviews of the RFAs had not taken place and public participation in environmental protection was “severely restricted”.

“The states do not take the regulatory and legal actions required to adequately protect matters of national significance,” the report said.

“This failing cannot be addressed by differently wording the RFA and strengthening states’ obligations: rather, the failure is fundamental to the concept of the RFAs and of devolving control of matters of national environmental significance from the commonwealth to the states.” 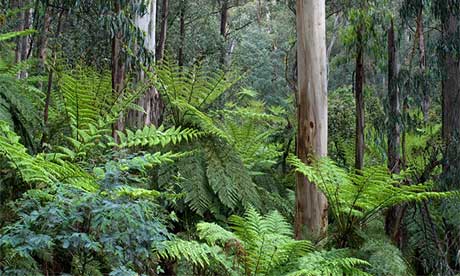 Errinundra Plateau, East Gippsland, Victoria. Photograph: Jude Deland/onestopchop In a letter to prime minister, Kevin Rudd, the groups called on him to “consider as a matter of urgency” whether RFAs should remain exempt from the EPBC act.

“The Regional Forest Agreements are a 15-year failed experiment in putting state governments in charge of environmental management,” said Lauren Caulfield, of Lawyers for Forests, one of the groups behind the report. “This damning report shows how state governments have systematically and deliberately mismanaged native forests after being handed control.”

Sarah Rees, director of MyEnvironment, said that the coalition was looking at whether a legal challenge, based on the Australian constitution, could be launched to usurp the RFAs.

“The RFAs have caused a wildlife crisis, but it’s more than that – our forests provide the water we drink, climate modulation and pollination,” she said. “It’s an extremely serious matter if this resource is mismanaged.

“If the forests were managed by the EPBC act, you’d have to provide an environmental impact statement if you wanted to cut trees down in an area populated by the threatened orange-bellied parrot, for example. But that doesn’t happen. There’s no scrutiny at all.”

Rees said there was a lack of auditing and up-to-date data due to a failure by the states to update forest management plans first drawn up in 1998.

“The RFAs failed primarily due to an absence of compliance and legal enforcement by state logging agencies and departments.

“As a result, species numbers are crashing in every major forested area we have. No area can say they have flourishing species other than feral species such as pigs and cats. The states have been negligent in their management of the forests.”

The federal Department of Agriculture, Fisheries and Forestry was contacted for comment on the criticism, as was VicForests, Victoria’s logging agency.

The Australian Forest Products Association, the peak body for the timber industry, said that the RFAs had helped provide Australia with one of the best timber sectors in the world.

Ross Hampton, CEO of the association, said: ‘The Regional Forest Agreements have been one of the great success stories of this nation. The reserve system established through the RFAs has delivered significant environmental benefits.”

“They have formed the key plank in the delivery of a world leading sustainable forest management system that achieves substantial environmental outcomes while providing access to resource to meet the needs for the timber products industry.”

“In areas of managed forests, the data clearly shows that through the sustainable forest management practices applied through the RFAs, the biodiversity objectives are being achieved. It is only where forests have been locked away in conservation areas that there is insufficient information to determine whether the environmental outcomes of the RFAs are being achieved.”